Adventures in Electroforming: Searching for Blorp

One of the things that really draws me to electroformed jewelry pieces is the organic and non-controllable way that the metal seems to ooze around the object being electroformed.  Here are a few pictures I found online from artists' pieces that made my heart flutter:

So full disclosure: I haven't figured it out yet.  But I am getting closer!

I think the issues I was facing at first was a bad electroplating bath.   I followed a recipe in a book that was just... wrong.  My pieces were coming out glittery. I did a little more research, bought a thingy to measure PH and added a shiton of acid to my mix.  The proper recipe is on the Reddit electroforming wiki


The next batch was much better, but still no blorp.  I decided at that point that I likely didn't leave it in long enough (not enough build up) and had my amps up way too high (had spikes instead of blorps) at the onset.

I think I had a a-ha moment in between batch 1 and 2 as well where I convinced myself that the blorp I was after could only be achieved by adding my own texture before putting my object into the electrobath.

In these pieces, I added 2 different types of sand from my nearby beach; a fine grit and a pretty chunky grit that I had to go out of my way to find.  I added the sand directly to my graphite paint and am keeping it separate for future use when I want this look:

My latest attempt I made I left the piece in for about 26 hours.  I also put it in my rock tumbler for 3 hours which I think helped round out the edges some.  I did not use the textured paint as I have come to believe that that was a red herring.
Sirs, I do believe I see some blorp around the edges!   I have a piece in the bath in my workshop as I write this.  By the time I get to pulling it out, it should have been in there for approximately 32 hours.  I can't wait to get home and see how it looks!

Posted by Brandee Blank at 7:00 AM No comments:

Adventures in Electroforming: My Workbench

I am so freaking lucky that we have a good-sized shed in our yard that the last owners decked out to function like a wood working studio.  We have been using it for storage, a spot to do small house projects, my photography studio in one corner and the home of my dubia colony. Since we moved in almost a decade ago, it has really not been used for more than that.  Which is ridiculous because this thing is insulated, has it's own electric circuits, is lined with pegboard and has waist-height counters all around with storage underneath.  It is a dream workshop that I have now taken over more than half to become my metalsmithing shop -woowoo!

I have been collecting gear to get this hobby started for about 3 weeks now.  I had to buy most of it, but had a fair amount of tools, wire and other ephemera from my beading hobbies already.  Three weeks into starting this whole thing my workshop is set up as below.  You have to have a good amount of starting equipment to get going, but I have already started adding 'extras' as I have been figuring out the process.  Truth be told, I was trying to be cautious (in case I didn't end up liking the process) and cheap.  Tip #1 for other beginners - don't be cheap.  If you are gonna do this, do it right.  The results are so much better.

Here is my bath setup.  I was using just a plastic red bin, but this weekend I already replaced it with a clear plastic bin that is taller.  I wanted to be able to look in and see what was happening!  My anodes are just copper pipes from the hardware store.  I tried several ways of wiring them together or to the sides of the tank and it ended up being a mess and hard to replace.  Luckily, the hubs had some extra wires with alligator clips so I was able to link them together (to effectively have a single anode) that way. 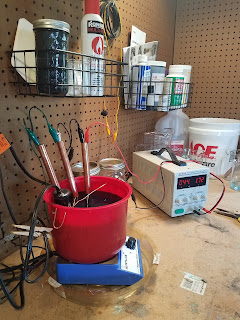 I was using several pipes since I had read that having your anode only in 1 area would plate heavier in the direction of the source of the copper.  I ended up getting a magnetic stirrer anyway due to the weird striations that appears on one of my pieces that I didn't like: 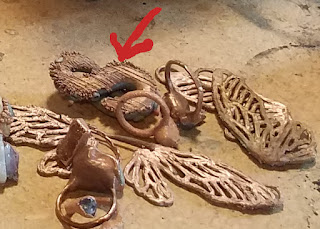 I picked up a simple soldering station kit and a mini-torch to help with making rings and the like.  In this shot, I am using it as a curing station on my first batch of pendants.  Having lots of extra polymer clay around has turned out to be quite helpful as I use it to help prop stuff up! 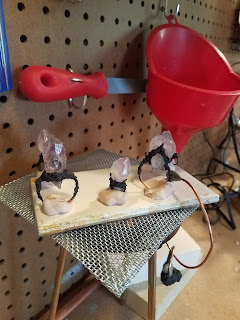 The pegboard walls have proven to be amazing for shelf units for my supplies leaving me with lots of table space to work.  I opted for a 3 volt rectifier, and I regret it.  I could have 2 baths going at once if I had gotten a bigger one.  If I end up going into production, I suppose I'll just have to get another one down the line. 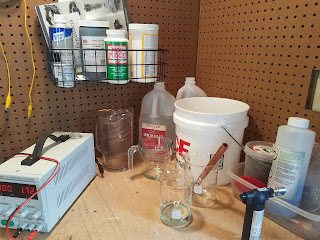 Here is a (crummy) shot of all the things I tried in my first batch.  A few rings and some polymer pieces.  What I learned from these mainly is that you have to leave stuff in the electrobath for a much longer time that what I had read online and 2) it is a really thin coating of metal: the texture underneath is really what you can expect to show up on the surface.  I was mystified by the blorpy stuff I was seeing online.  But I shall leave that for another entry. 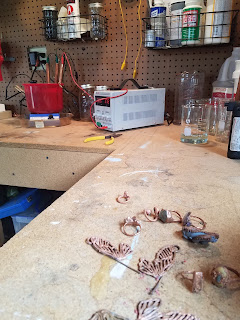 Since taking these shots 2 weekends ago, I have added a rock tumbler to the set up (which I think is a must have), changed out the container for the bath, and added some more metal-smithing tools to aid in constructing my base pieces.

If you have any questions about the equipment here, I am happy to answer with what I know and what I tried out!

Posted by Brandee Blank at 12:20 PM No comments:

Adventures in Electroforming: The Journey Begins

The carpal tunnel surgery was a success!  I have been back at work for a couple weeks now and have started arting in my spare time again.  There is still a little bit of flexibility issues in my palm and a tiny bit of pain here and there but both are getting better every day.  Being out of pain is amazing.  It is hard to describe what it is like to be in constant pain and then suddenly not.  I feel an intangible mental lightness.

The procedure and the recovery were a LOT more than I bargained for.  I thought I would be able to be on the computer gaming or doing art a couple days after the surgery with a little boo-boo.  Let's just say I am dumb as rocks and realized after the fact that I had talked myself out of pre-procedure anxiety by convincing myself this was no biggie.  Because I was stuck watching Netflix and YouTube for 3 weeks straight, I stumbled onto something new to take up my time, creative energy, and money.  Hint: read the title of this post.

For the next little while, I am going to be using this blog to write about and chart my growth in learning how to electroform and make metal jewelry.  I hope doing so will help other noobs to this artform out there find their footing.  YouTube is entirely teaching me how to do this.  The results are just starting to look positive - I am wearing my first pendant right now (and I'll post the first couple of weeks worth of atrocities in the next post or two)!  I am also having to learn how to do very minor metalsmithing so that content will also likely find itself here.

Before I write my first post with some actual meat in it, I want to shout out Ralph McCasky of Nightside Studios whose work was my first real introduction to electroforming when I saw it in person at a bead show many years ago, and to the four YouTubers that finally influenced my decision to go ahead down this path.

The CrafsMan SteadyCraftin: Just go subscribe to him right now.  He is amazing and every time he uploads, my husband and I get really excited to watch his show.  He makes all sorts of things, has a great personality, and is just the most wholesome thing on the internet.  He does not do electroforming, but his video on copper patinas that he made back in Jan 2019 made me fall in love with the idea of doing stuff in copper.

Yvonne Williams : I have been subbed to her for quite some time.  She is the most calming crafter and does a lot of cosplay related crafts.  While I was laid up, she did an electroforming in copper video and I became immediately obsessed!

Nick Martinelli : His was the first video that came up when I searched for electroforming.  This was the best intro video I could have hoped for because it has everything I needed to know on a basic level to help me decide if I was going to push forward or not.  I wish he had made more videos!

Jason Welsh : Put a big bold asterisk and 73 exclamation points next to this one.  Jason is amazeballs.  He has shared so many of his techniques, processes, hints, and tips and almost all of it is freely available on YouTube.  If you have even the slightest inclination to get into this, go visit his site. 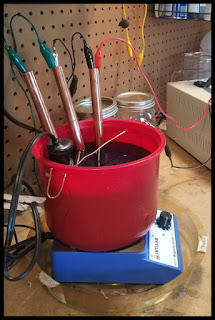 Posted by Brandee Blank at 10:22 AM No comments: