The last time my good friends came over to my house before they vacated the Bay Area for Portland, they caught sight of my naughty bathroom x-stitch I made many years ago.  I have never seen Diane laugh that hard and I promised her I'd make her one for her bathroom as a house warming present.  Fast forward 1 year and 1 month, and we were on our way to PDX for the grand tour and I had to actually produce one for her.  Admittedly, I had literally started this project 3 different times and then gave up because nothing was feeling right.  I did finally settle on a design and just went for it.  What had been dragging me down and taking me months to accomplish with all the false starts, I was able to complete,  concept-to-finish,  in two weekends because when it is right, it is right: 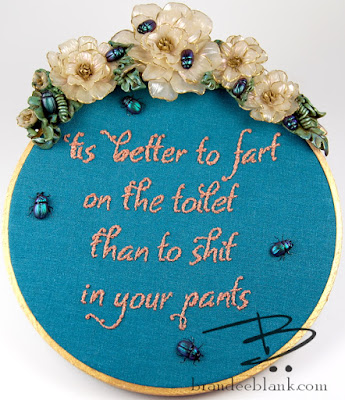 The words are done in a wrapped stem stitch with some french knots thrown in where the font I used called for dots.  It is not the neatest of embroidery jobs, but I still left the back open so that it can be viewed if wanted: 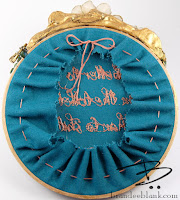 I did my typical flowers, leaves and tendrils on the frame in polymer clay, and threw in little beetles of course because apparently I can't make anything without insects on it.  I brought a couple of the beetles from the frame onto the stitched portion.  I feel like they brought the piece together. 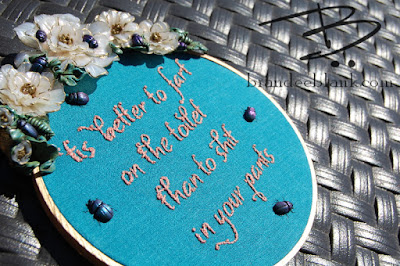 The most serendipitous part of this: she has her new house decorated with this exact color turquoise as the highlight color, and there is insect decor everywhere.   I had had no idea.  The universe just spoke to me and I'm so happy I listened!

While in PDX  I was extremely fairy inspired (anyone who has been to Portland will tell you how magical it is there) so on this, the first weekend since I am back, I decided to figure out how to make fairy wings.  There are tons of tutorials online, so I watched and read a good half dozen or so, and then started playing around with techniques until I figured out worked best for me and followed my own path.  I think they came out fantastic!  I just need to figure out wtf I should make with them. 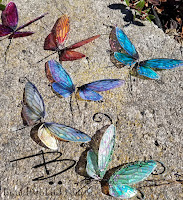 I also discovered Instagram stories (three years too late, hoo-boy) but this story was pretty indicative of my day yesterday: 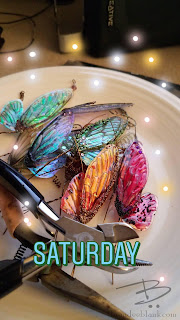 I also finished my cicada necklace some time ago and never posted.  I see that I had posted the wings whilst in progress, but failed to post final project.  Whoopsies doodles.  Here she is: 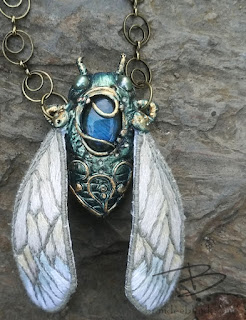 Posted by Brandee Blank at 9:15 AM No comments: